Mauro was born in Vasto 26 October 1927. He completed primary schooling and then began to work on his family’s land.

Mauro was sponsored by Nicola Celenza and arrived in Fremantle on 13 June 1953 on the ship Neptunia. He in turn sponsored Alberto Colameo, Guido Di Biase and Carmine Dolce.

He worked in Perth at Humes Steel and then for Cooper Bros in road construction and land subdivision. In due course he set up his own successful sewerage and drainage company, working all over the metropolitan area .

Mauro married Maria Lemme from Vasto, who arrived 18 April 1954 on the ship Oceania. 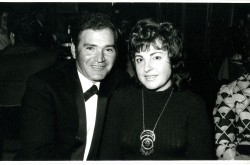