Apart from the not so clear relationship between colonialism and migration which occurred in the African countries, one can consider those that invested capital in some commercial undertaking, but above all”those that went on their own and taking their families, with only the help of their arms to work, or modest study title, with their limited peasant savings, or to invest their little capital in small businesses, of micro businessmen, often on their own or with families”. As Lablanca states “with respect to a colonial history which was mainly a story of politics, militarism or diplomacy” there is a need to deepen “a history of the experience of colonial mass migration”. “A history in which big leaps, heavy work and sincere passions are intertwined oppression, exploitation, racism, and in some cases extermination, if not outright genocides”. In any case it’s a history often forgotten which can and should be rediscovered only with an adequate documentation.

In the meanwhile its well to establish that, in effect, despite the millions of Italians that the Fascist regime flagged to occupy a propagandist place in the sun, in fact there were only hundreds of thousands colonists transferred. 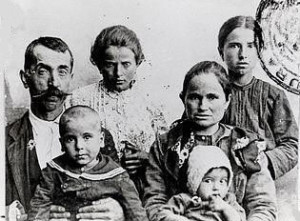 Family of Italian migrants departing for Libya. Genoa about 1900

Let’s have a look at the numbers involved: First of all there were 300,000 the Italians that left for the non-Italian parts of Africa. In Libya at the beginning of the century there were 26,000, which decreased with the outbreak of the war in 1911-2. With the successive pull back towards the coast and the major cities (there were 17,000) until the peak period (130,000) in 1940. Worthy of mention was the movement of twenty thousand in 1938-9 with the shifting of thousands of peasant families to populate new farming areas.

Significant was the contribution of the Italians in the French and English colonies of the Mediterranean. In 1925 there were in Africa just under 200,000 Italian workers, tied to the ever changing international labour market and independent fro political factors, distributed as follows: Algeria (28,000), Egypt (49,000), Tunisia (97,000), and Morocco (10,000). One can then speak of a sizable Italian colonial migration, which although is significantly tied to the Mediterranean coast interacted in a minor way with black Africa. In the colonies of southern Africa there arrived, but without forming communities, business investors, technical experts, humble workers, ascetic missionaries and the usual adventurers. There was a particular contribution of the officers that wanted to give service, generally after having fought in Eritrea, in the Congo for the King of Belgium. The last and definite group of migrants are the conscripts who were prepared to fight and help to keep the military control of the colonies for the European countries. 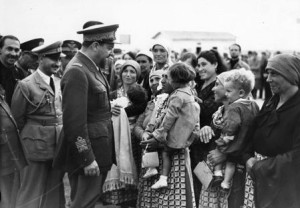