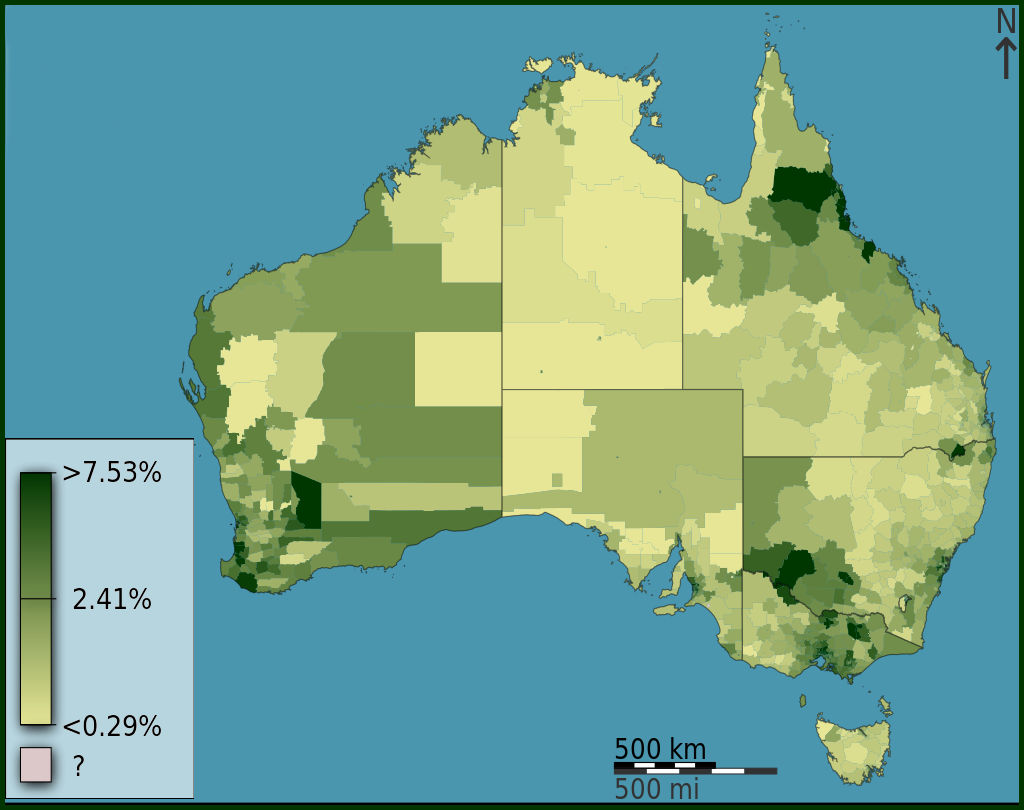 The map above shows people with Italian ancestry as a percentage of the population in Australia divided geographically by statistical local area, as of the 2011 census

Italian migration to Australia began quite late in respect to other countries. Until 1880 there were very few Italians present. Some arrived occasionally, due to not only the need for work, but also political events in the Lombardy and Venetian areas which were part of the Austro-Hungarian Empire. In fact our nationals were above all agriculturalists, builders and miners from Lombardy and the Po Valley. 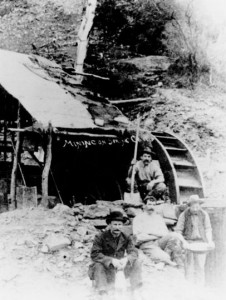 In fact Australia was a prohibitive destination because of the cost of the voyage, which was a real adventure (in that to reach it one had to circumnavigate Africa), and also the lack of direct shipping lines. In 1881 the Italians numbered just over 1,700, nearly all of them concentrated in the three eastern states of New South Wales, Victoria and Queensland. Before the end of the century there arrived on the continent more than 300 peasants from central northern Italy called out to work in the sugar cane of Queensland and several hundred northern miners were attracted by the gold rushes in Western Australia. With around the movement of 12,000 until the outbreak of the war the number of Italians in Australia grew to about 7,000. With the blockage of access to the United States, Australia became one of the preferred destinations for migrants. 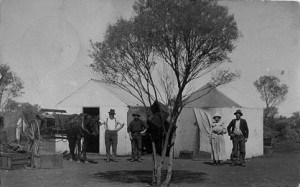 Particularly significant are the four years1922-5 in which the number of arrivals is estimated at around 15,000. From then, due to the resistance of the Fascist regime which tried stemming the flow of migrants, there was the added problem of the great depression of 1929 and the Australian Federation was forced to limit the large influx of Italian workers. To the legislative restrictions and also to the lack of available work, there were also episodes of racial tensions and social conflicts, in which a number of Italians were involved.

In any case, the situation in 1933, in a moment of a relative downturn, the Italian community had become the most numerous non English speaking group with 26,000 individuals (of which well over 20,000 were males) and in the following years with the arrival of wives and children to reunite the families the situation became more stable. The period that followed the outbreak of the Second World War was for the Italian migrants a very hard period as they were treated as enemies of the state, being from a country involved in the conflict. After being deprived of work, they were taken from their homes and families, and were taken to work on farms away from the coast or transferred to internment camps where they met up with Italian prisoners, captured in the war and transported here (in total the number of Italians dislocated were about 18,000). The only positive aspect of this deportation, it seems was the change in mentality in the Australian public opinion, that from these years began to think of the Italians as a hard working and responsible people.

The development after the war lead to a shortage of labour and this forced the government to plan for the future. In 1951 the bilateral agreement allowed family reunions with those that had remained in Australia before the war and it prepared the “sponsored guarantee” program, often under the cover of relatives already established. So began that which for 20 years became a mass exodus with the intention of permanent settlement. Some researchers estimate that after the mass movement of those years (including first and second generation) it reached the record figure of 500,000 people. 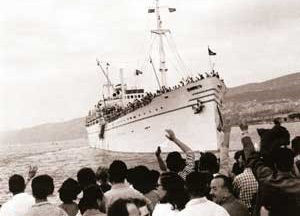 Departure for Australia on the ship Flaminia. Trieste August 1956

From the end of the 1960s the migration movement began to reduce and then stopped soon after. In the 1980s the Italians made up 2% of the total population and 10% of foreign born. Another interesting feature is that the flow during this period was largely from the southern regions of Italy, which amounted to 56% and from the islands 25.5%, with the largest numbers coming from Calabria and Sicily, which made up a third of the arrivals.

Some figures allow us to take a sociological snapshot of the “Italo-Australian” world.

In 1980 our countrymen were concentrated above all in the large cities. And their surroundings in eastern Australia: 200,000 in Melbourne, 180,000 in Sydney, 90,000 in Adelaide. Working in general in the industrial sector. In these years the first generation Italians, in the census around 150,000 were permanently employed. A large number were found in the agricultural areas of the three eastern states as owners of farms and lands that they cultivated. Following this there seems to have been a development in the activities undertaken because many, in the suburbs of the great cities, undertook tertiary occupations in commerce, the restaurant business and construction.

Apart from the statistics an example is the substantial presence of Abruzzesi and in particular the Vastesi in Perth, and some other notable examples of this “Italo-Australian” culture are Fremantle (in Western Australia), Fairfield and Leichhardt (in New South Wales) and Carlton & Griffith (in Victoria). 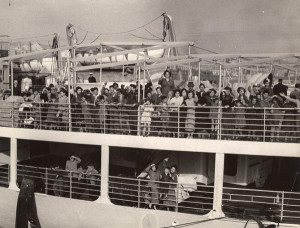 How the Vastesi workers lived in Australia in the 1920s

“[…] Australia is 26 times bigger than Italy, but is very unpopulated and there are just six million inhabitants. The seasons here are different from those of Europe, because while in Europe on the 21st of September autumn begins; in Australia on the same day spring begins.

The work that we do is the clearing of immense heavy bushland. The trees that we cut down are burnt and the land is prepared for seeding.

I work in the bush with six other Vastesi and I earn half a sterling a day. Food you can buy at a good price, eggs cost a penny (two soldi) each. Bread and the meat one schilling (£. 1,25) per kilo.

In Australia the temperature is very hot, we sleep in the bush under the tent, and work is very hard, especially because of the huge number of insects that torment us while we work. While in the city one drinks good fountain water, here instead its sauce and not good, and we are forced to drink rainwater which we collect in a puddle and then we boil’ In my voyage from Naples to Australia it took 34 days on the ship Palermo, on the coast of Africa south of Port Said, I found a heatwave, it was 44 degrees, which burnt the ground…

List of the first Vastesi that arrived in Australia 1926-7: 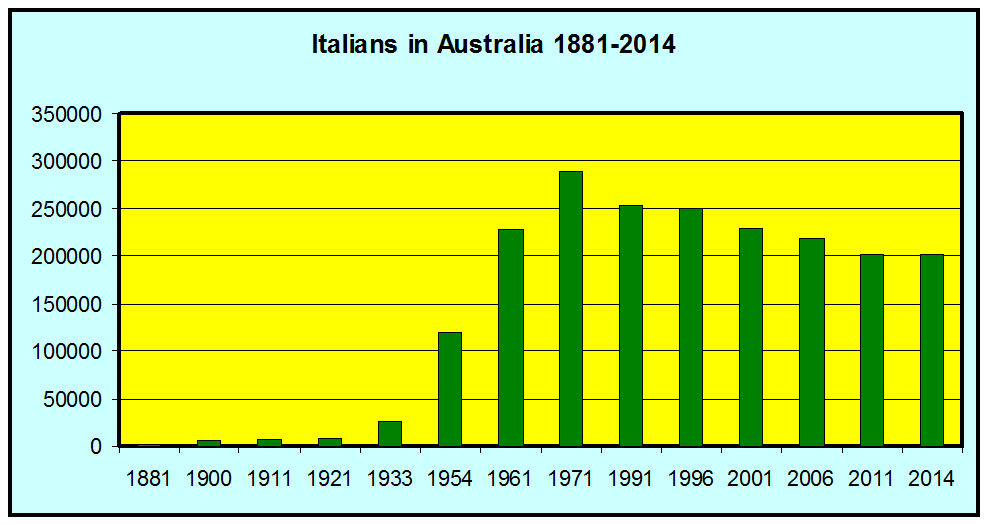