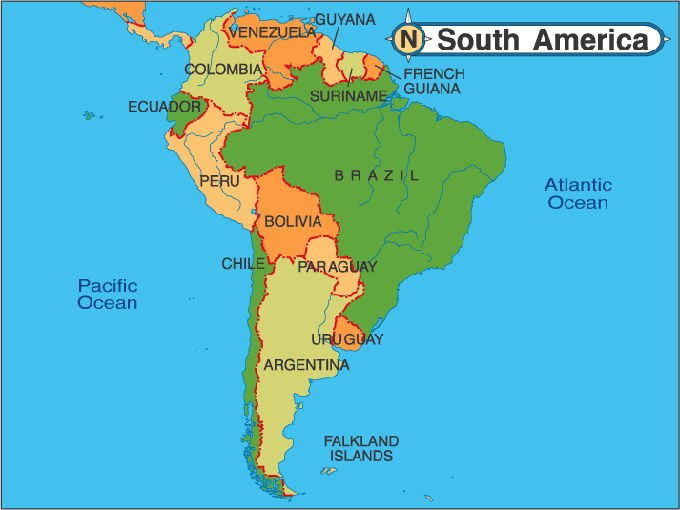 In 150 years there arrived in Argentina 3 and a half million Italians, who were spread out in all the environments and crossed all the social classes. If one thinks that in an area of more than 1.1 million square metres in 1850 the population was I million inhabitants one can understand that this immense state had the need to attract workers and to open new internal frontiers. From then all the changes that have occurred in the Argentinean society in some way are tied to the Italian presence.

At the end of the 1860s the Italians were concentrated above all in the great cities: in Buenos Aires (60%) and Rosario (3%). The first to reach the eastern side of the state, being occupied with navigation in the rivers and all associated activities were the sailors from the Liguria region, who established themselves in the international zone of the Rio de la Plata, of Uruguay and Paraná`, did not take too seriously the official borders of those countries. The new arrivals, run by Genoese shipping companies, take the migrants to suburb of La Boca (where they make up 10% of all residents). The first group soon get together in an association and already from 1873 was born the “Circolo Italiano”, with the immediate opposing grouping between the republicans and monarch cists, who represent two distinct communities with two separate newspapers.

In 1880 the Italian made up the most consistent group of migrants (about 70%). In the period 1881-1914 there were registered 2 million new arrivals (more than 47% of the total population).  The first to migrate in general were young males from rural areas who arrive making use of “chain migration”, soon followed by their families. In due course many specialised workers contributed to the expansion of the frontier, cultivating new lands, building railways, ports and the building industry. The situation in 1895 is that there is a community of half million people who were making a substantial impact on the Argentinean economy. Just to quote some figures the Italian represent 35% of owners of industrial businesses and just in Buenos Aires owned 47% of house rentals. 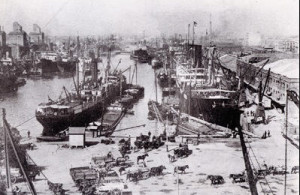 At the beginning of the Great War one reached the peak of the Italian presence (930,000 residents). Amongst these many men with high expectations, 69% localised in urban areas for some time: 20% of the population of Buenos Aires, 20% of Rosario and 17% of La Plata. Italians are also present in large numbers in rural areas in the provinces of Cordoba and Santa Fe, generally as renters of land and agricultural pursuits. Between all our migrants 144,000 belonged to the 463 mutual assistance groups, spread all over the country, and hence represented social groupings. Also the newspapers in Italian (“La Patria degli Italiani” the most popular one) had a large circulation. Integration with the Argentineans was not particularly strong. As shown by some elements which distinguished our communities: high level of endogamy; uniform distribution in the country tied to the age of insertion; membership and belonging to association from same countrymen. It was a pluralistic situation with little conflict, favoured by the great demand for labour and areas to occupy, even if there was little request for Argentinean citizenship. 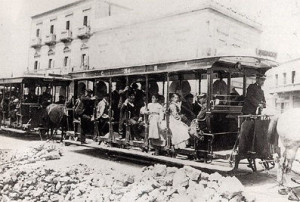 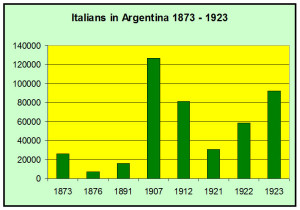 With the breakout of the war migration underwent a drastic reduction and many Italians returned home. With the economic difficulties of 1918-9 and the following disorders there were introduced restrictions in migration, above all severe entry controls and the obligation to have a work contract. Despite these difficulties there was a reasonable flow in the years 1921-4. After the Fascist laws in 1927 and the world economic crisis in 1930 the exodus dropped.

The first decades of the 19th century represent the period of social integration in the privileged fields of sport (the two clubs Boca Juniors and River Plate were founded by Italians), popular music and politics. From a social point of view areas of growth were represented by the church and the army. There was a substantial decrease in the importance of associations and after 1938 began the arrival the anti Fascists and Jews, who integrated themselves well in the various levels of work.

After WW2 with the advent of the Peron government there was the launch of the five year plans which encouraged the return of migrants, in collaboration with the Italian state and the Vatican and with the preliminary formalisation of labour contracts. After a substantial influx (1947-51) which saw the movement of over 300,000 workers, in the following years the decreased substantially to the point where in the second half of the fifties there were more returns than migration.

Its worthwhile noting that in this twenty year period of movement, and until 1960 there were many family reunions, the proliferation of many associations, the stable presence of the Scalabrinians for religious assistance, the arrival of many refugees compromised in the fascist period, and the collaboration between Italian industrialists already operating in Argentina and other new arrivals. Altogether it can be considered as a period of varied integration.

Also the state of Brazil, like other nations with the dimensions of a continent, has always had the need to increase its population to cover a boundless land with a very low population density. The estimate of Italian migration to this land of South America in a period of a century is about one and a half million migrants. The lion’s share is represented by the period at the end of the century (1887-1902) with over 900.000 movements, with a percentage of around 60% of the total foreign arrivals.

The major factor of this mass exodus was a direct consequence of assisted migration, as some of the states in the Brazilian Federation, covered the costs of the voyage. A part of the migrants went to the coffee growing areas, attracted by the promise that they could obtain some land to cultivate.

This flow was begun because of agricultural colonisation and was characterised by the movement of entire families with the intention of permanent settlement in the colonies and was the beginning of the creation of small and middle sized family agricultural holdings to which a house was given as well as some ten hectare lots. 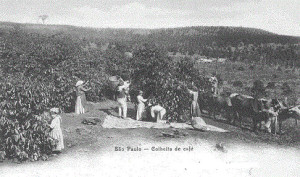 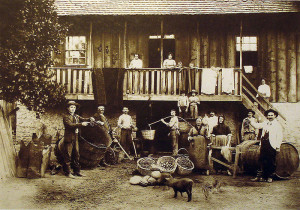 Italian migrants in Caxias do Sul 1918

Another group instead went to the facendas where the Italians are used as almost slave labour (1888 was the year of the official abolition of slavery), isolated from the rest of the country and badly paid. Numberless the number of violent episodes, segregation, limitation of personal freedom by the part of the fazendeiro which lead to a complete failure of the experiment due to the repeated denouncements by the Italian consuls and with the escape towards the nearby cities or return to Italy. In this period our region is a large participant of the exodus (over 7% of the migrants are from Abruzzo). From the very beginning the Italians that lived in the cities specialised in specific occupations (bricklayers & master builders, travelling and retail salesmen, small restaurants, artisans) giving an image and a mark of an Italian atmosphere. In Sao Paolo (where they make up a third of the population) various suburbs show features on various regions of Italy rather than a generic one. The settlements are structures in barrack style which contain apartments in which lived 8-10 people. Later the more fortunate were able to build independent houses.

From 1902 there was a substantial decrease of Italian migrant contribution to Brazil because of the crisis in the coffee, and the intervention of the Italian government, who seeing the previous catastrophic events, prohibited the subsidised voyages. Until the end of the Great War there just over 300,000 the Italian migrants. Even if the preferred destination was Sao Paolo and its surroundings, the Italian presence was notable in the southern states including Minas Gerais, Rio de Janeiro, Rio Grande Do Sol and Espirito Santo.

Durante the twenty years of Fascist rule the arrivals drop down to 88,000 above all because of the depression and the over production of coffee which blocked the export overseas.

Some migrants managed to make do well, in the areas of building and finance propagating the myth of “self made man”. Important from a cultural point of view the periodical publications in Italian especially in the state of Sao Paolo. In the hundreds of associations founded by our countrymen they recreated a piece of Italy in the traditions, religious festivals, sport, and getting involved with charitable work and mutual benefit groups. Dispersed in all the territory there were drammatical groups, bands and schools of the Italian language. With the outbreak of hostilities nearly all these social groups were repressed by the Brazilian government which branded them as propaganda for the Italian government, with which they were in conflict. There began heavy years for our countrymen who suffered heavy limitations to their personal freedoms, working life and their associations.

At the end of WW2 the Brazilian government again tried to attract the masses of our peasants offering the free voyage to Brazil and favouring the formation of agricultural co-operatives (particularly significant is the contribution of Abruzzesi in this new agricultural colonisation) in various states of the federation. In this project of cooperation there were also technical people and artisans. The attempt did not last long as it was unsuccessful and forced the greater part of the migrants to seek refuge in the coastal cities or return to Italy. After the 1960s the migrant’s numbers declined to a few hundred which spelt the end of this migration epoch. 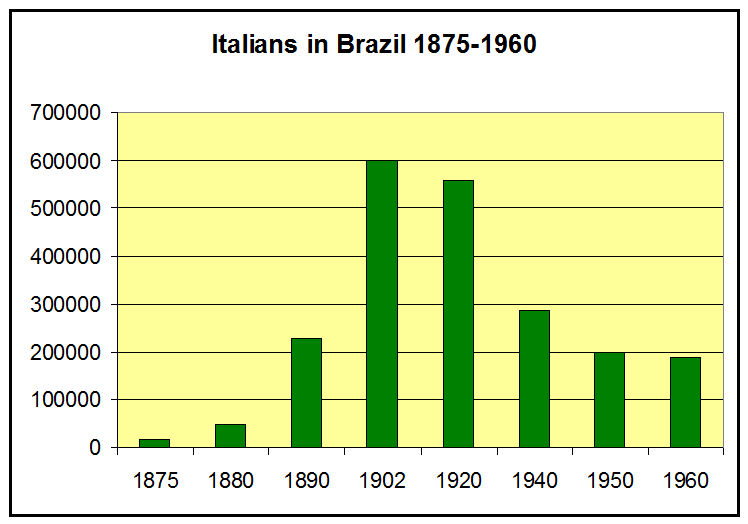