He worked on his family’s market garden from an early age, helping his mother Teresa. His father Nicola had emigrated to the USA. After his military service, Leonardo migrated to Australia (sponsored by Giuseppe Del Borrello) arriving 19 March 1956 on the ship Oceania.

He worked as a labourer at first, and after learning the trade on site became a plasterer. He worked at this trade until his retirement.
He married Maria Saraceni and they have two children: Anna Teresa (1959) and Nicola (1961).

Leonardo became an Australian citizen in 1965. 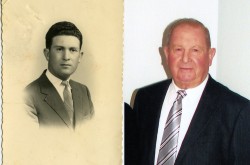