Bruce West comes from a farming background. His grandfather came from Victoria and took up land in the Dumbleyung district, where the family pioneered farmland. His father in due course took up land in Kondinin, where Bruce was born. The West family ran farms in Kondinin and also a business in town. They employed Giuseppe (Tony) on their farm for many years.

Bruce has retired from farming and now lives in Fremantle, where he was interviewed.

Giuseppe (Tony) was born in Vasto 4 March 1908. He was sponsored by his uncle Michele Schiavone and arrived in Fremantle 20 March 1927, together with Michele La Canale, on the ship Citta` di Genova. He worked for two years on potato farms and then went clearing bush.

He worked for many years on the West farms, and with a partner also ran a transport company for two years. Later in life he worked as a truck driver for the Government Railways and finally retired in Kondinin, where he died 3 November 1990. He returned to Vasto only once in 1977. 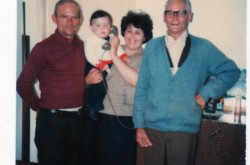