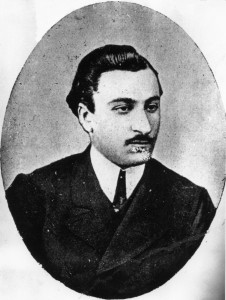 He was a descendant of one of the oldest and most entitled families. He took part in the Italian unification as an officer with Garibaldi. In 1860 he followed General Garibaldi to Capua, in 1862 to Aspromonte and in 1866 to Bezzecca. Finally he was present in the defence of Paris in 1870. After the fall of the French capital by the Prussian troops he went to England as a refugee.

Here he undertook a number of cultural activities, writing various comments on Italian literature, directed the periodical “The Minstrel”, translated some English texts into Italian and organised many conferences in all the United Kingdom. He was professor of Italian at King’s College in London (the same position held by Gabriele Rossetti).

As an avid student of Dante he was one of the founding members in 1881 of the Dante Alighieri Society in England, of which he remained for decades one of the most strong willed and fruitful supporter.