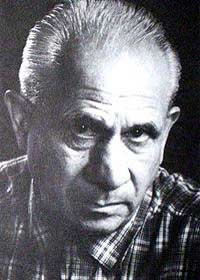 In Vasto he worked with his boot maker father as an apprentice. In 1909 the family migrated to Argentina and settled in La Boca in Buenos Aires, in front of the old bridge where Juan fell in love with the Rianchelo and its colours. Having discovered his artistic vocation he began to teach himself and his first works were completed in1920-2. He opened his own studio at Vuelta del Rocha and there followed some figurative canons and attended the Academy “Perugino”. In 1929 he became an Argentinean citizen. He received a scholarship for the Institute “Amigos de l’arte” and went to Paris, where he met artists and had a variety of experiences, such as the cubist one, and took part in various exhibitions.

He returned to Argentina in 1933, and married in 1937 with the artist Eugenia Crenovich. From then on he developed a new and personal non figurative style, called Futucubismo, with interesting experiments including the area of collage. From the 1930s he took part in the Biennale and private galleries travelling the world. He gifted 107 of his paintings to the Vasto Museum, after embarking 11 April 1977 on the ship Marconi with his works in a memory lane trip, almost a pilgrimage to his human roots. He died in Buenos Aires 4 February 1987. 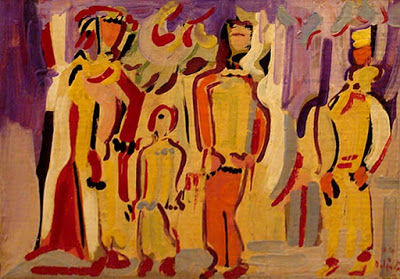