Luigi (Gino) Marinucci was born in Vasto (Chieti Abruzzo Italy) 16 September 1935. His father Tommaso was a fisherman, and he spent his early youth helping his father.

After completing his primary schooling he went to work for an optician, and then worked as a porter in a hotel in Genoa.

He decided to migrate to Australia in the hope of making a better future for himself and was sponsored by his brother in law Giuseppe Cilli. He in turn sponsored his family (sisters Maria 1956, Filomena 1957 and then rest of the family: mother Anna, brother Filippo and sister Rosa came together in 1958).

He worked in the building industry as a labourer in Perth and then went to Darwin with four other Vastesi. From there he went to Alice Springs, where he spent 30 years. In due course he created his own successful building company.

He decided to leave Alice Springs and went to live in Adelaide, where he and his wife opened a restaurant San Marco.

He married Lindley Anne Morris and they had five children: Tommaso, Diana, Emma, Phillip and Sofia. 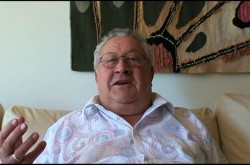