Teodoro Notarangelo was born in Vasto Italy on 22 February 1928.

His family came from the land in Italy. He migrated to Western Australia and was sponsored by Paolo Vinciguerra, arriving on the 18 January 1956 on the ship Toscanelli. He embarked from Brindisi.

He worked in Australia in the brickworks in Armadale and later with the company Brisbane & Wunderlich.

Subsequently Teodoro decided to return to Vasto in 1996 and has since lived there permanently. He became an Australian citizen in 1968. 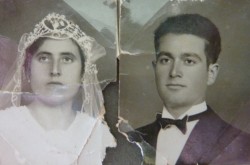