With the fall of the Roman Empire, our city suffered for almost two centuries the barbaric invasions which succeed each other in their conquest of Italy, until 589 it became part of the Lombard Dukedom of Benevento.

In 774 Grimald, son of Arechis, the Duke of Benevento, forced Charlemagne to send him, with a considerable army, against Pipino. The latter, who entered the Dukedom and after having sacked Chieti & Ortona e ruined Buca destroyed Histonium. The siege was run by captain Aymone of Dordogne, who, irritated by the obstinate defence of this land, he took it by assault, first he sacked it and then burnt it. And so it was that Histonuim, after so many centuries of glorious life, due to the ferocity of the Franks, disappeared from the list of communes.

In a another moment, Pipino, after the conquest of the Duchy of Benevento, not being able to compensate his soldiers & captains with money, he recompensed them with feudal lands, some of which were given as Counties & others as Guastaldie. (5)

Pipino, remembering the ruined city of Histonium, gave it as a Guastaldo to Aymone of Dordogne, who, attracted by the pleasantness of the place, began to reconstruct it and was called Guasto Aymone.

Amongst the events of this period one can recall: the passage of the Emperor Henry III in 1047, of the German Emperor Lothar in 1136 and the stay in our city of Pope Alexander III from 7 February to 7 March 1177.

From the 10th to the 15th centuries the events of Vasto reflected all the vicissitudes suffered by the lands & cities of southern Italy, and because of this she went from one master to another. In 1269 the city was under the jurisdiction of the Benedictine monks of San Giovanni in Venere, then Charles I of Anjou gave it as feudal lands (6) to Tommaso Fasanella. In 1273 it went to Guglielmo Scillata and, from feudal lord to feudal lord, until 1346, when Queen Giovanna took the feudal lands from Raimondo Caldora and gave it to her sister Maria and when she died in 1366 our land became part of the Royal Domain of the City of Naples.

From 1400 to 1414 our city was subjugated to Ladislaus of Durazzo, who was followed by Giovanna II who gave it as feudal lands to Giacomo Caldora, the famous mercenary leader who at the siege of Aquila was able to take prisoner the very famous Braccio di Montone.

(5) From Gastaldo = administrator of the king’s property

(6) The feudal land was the public territory that the Sovereign conceded to his vassals to remunerate them for their services or merits earned towards the Crown. The essential condition, in the ceding of the feudal land, was the obligation of fidelity. 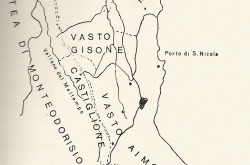 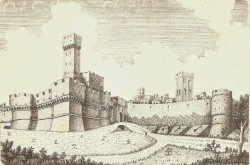