The Coat of Arms Vasto

All cities of a reasonable importance make use of a coat of arms.

The origins of the Vastese coat of arms, “framed in silver and red” goes back according to some historians, to the Longobard period, and its identical to the one of Benevento, main centre of the Duchy of the same name, under which Vasto was an important vassal. It can be admired at the head of the entrance to the Council House in Piazza Barbacani.

Authors, specialists on the subject, uphold that the red is symbol of justice, charity and vigour, while the silver is symbolical of candour and unshakeable faith.

The “golden” colour, mentioned by Marchesani, on page 115 of his History of Vasto, is a stranger in our coat of arms.

The oldest depiction of it was the one carved on stone which, in 1345, one could see inserted at the base of the Santa Maria bell tower. On the stone there were three heraldic emblems, one of Maria of Durazzo (sister of Giovanna I), in that year our feudal lord, one from the city and another of the Chapter of Saint Mary, represented by two keys.

After various events, Luigi Anelli took care, even though a third was missing, to place it decorously in the old museum, at the ground floor of the Under Prefecture. Following the shift of the museum, the stone is probably found heaped in a storeroom of Palazzo d’Avalos.

In the 16th and 17th centuries the health bills, which the Comune gave out to the visitors that asked for them, was headed by three emblems, on the left the emblem of the house of d’Avalos, on the right the municipal one and in the centre the Virgin Assumption, the protrectress of the city, until 1827, when it was officially changed to the Archangel St Michael.

Its worthy of note that, in the past as well as currently, the colour and the glazing are often inverted in their right position. That is the framing of silver and red becomes red and silver. 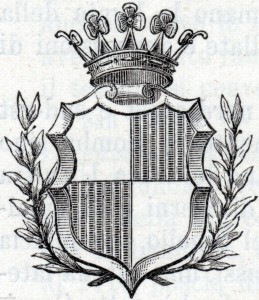 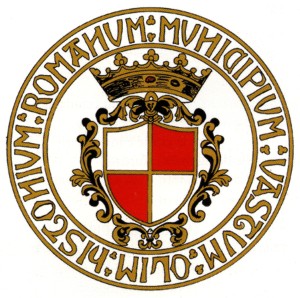