In 1840, by the initiative of the tenor Gaetano Crisci, a section of the “Young Italy” movement was formed. Because of their patriotic activities, which took part intensively in our city, by illustrious citizens, there were many that suffered persecutions & gaol from the Bourbon government; but, finally, on thr 4th of September 1860, at the first news of Garibaldi’s march against Naples, the Vastesi assaulted the offices and knocked down the Bourbon emblems  from all the public buildings, so that, first amonst all the brothers of Abruzzo, Vasto rebelled against the tyranny of the Bourbons, and sang praises to Victor Emmanuel & Garibaldi. 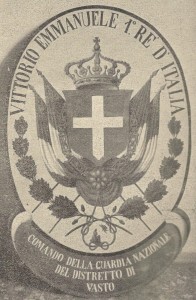